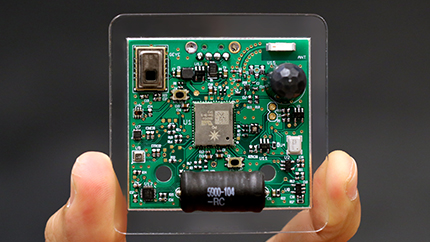 When we talk about sensors, we often don’t get too far into what the mechanism is that is used to sense the movement or temperature, light intensity or humidity for example. We don’t even think much about the fact that multiple sensors may be in play, increasing accuracy of measurement or used to detect a complex movement or situation.

Great strides have been made recently regarding sensors, with large credit given to Gierad Laput Ph.D., a former Carnegie Melon University student. He developed what he refers to as Synthetic Sensors. His design includes multiple sensors on a small IC board which can be trained using machine learning algorithms. The data can then be used after this training to detect special events in a particular room, be it a car, workshop, office etc. in short, this platform can translate data from a single low-cost IoT device into many different events. Think along the lines of faucets running, appliance usage and paper towels usage at its most basic example.

Synthetic sensor will revolutionize how devices sense their surroundings .

This represents a great departure from single use only sensors that are used to measure things like occupancy, door opening etc. The Synthetic Sensors, in a room, are able to receive data, interpret it and finally transmit this data regarding multiple inputs like, vibrations (sound included),